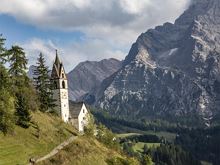 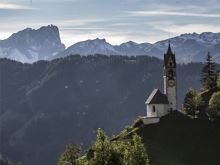 The Santa Barbara church, built in the late Gothic style, was built in the 15th century on a panoramic hill just outside the village of La Val.

Historical evidence indicates that the church built in honor of Santa Barbara, patron saint of miners, is the work of the miners of Valparola, who worked the iron minerals extracted from Monte Pore.

The painting on the outside wall depictings a crucifixion in the open countryside and various mural paintings inside are of particular historical value.

The Santa Barbara church can be reached with just a half-hour walk from the village centre of La Val along the "Memento Vivere" meditation path, consisting of the stations "Birth", "Childhood", "Youth", "Adults age" and "Old age".