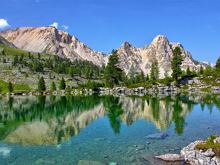 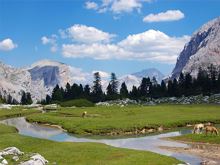 The Fanes - Senes - Braies Nature Park is part of the Dolomites UNESCO World Heritage. It is also called "the shining face of the Dolomites" because of the rich variety of its vegetation and landscapes, with steep cliffs rising at the edge of the Park and protecting a large area of pastures and colorful plateaus.

A hike through the Nature Park will take you to the mysterious places of the legend of the Kingdom of Fanes. The saga, which is considered the Ladin national epic poem, tells of the expansion of the mythical Fanes empire and its fall, of the princesses Moltina and Dolasilla, of the evil wizard Spina de Mul and of the fearless hero Ey de Net.