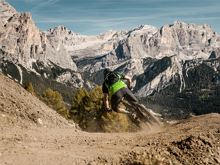 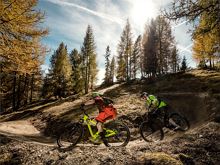 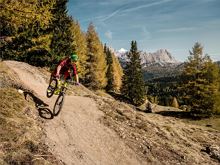 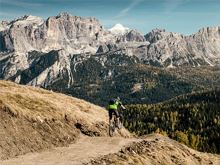 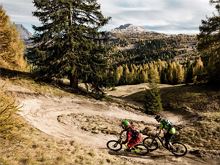 In Alta Badia you can have even more fun thanks to the three new BIKE BEATS - ALTA BADIA TRAILS circuits set up at 2000 metres in the Piz Sorega area, in the heart of the Movimënt Area.

Cyclists can decide the level of difficulty of the tracks which are divided by colour: green (easy), blue (intermediate) and red (difficult). These are Country Flow circuits, so trails with no traffic, side railings and easy/medium difficulty jumps. The fact that you can choose varying levels of difficulty makes the Bike Beats Trails suitable both for families with children and young people and all those who wish to try the thrill of a descent on a trail entirely dedicated to cycling. For those who require protective gear, this can be hired at the beginning of the trails, but is not compulsory.

All trails start from the same spot of the Piz Sorega and are divided based on colour. They ultimately converge in one point at the station at the bottom of the ski lift bearing the same name. At the end of the trail, you can wash your bike at the convenient bike wash station. Access to the Bike Beats - Alta Badia Trails is free.