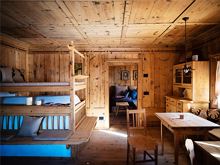 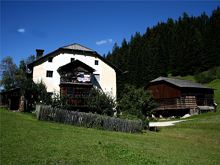 If we take the path above the Church in Badia, after about half an hour, we arrive at a junction; one road leads to Valgiarëi and the other to Sotciastel. The name of this farm is easy to  explain; the Ciastel farm is further above. As it's the case in many other places the name of the settlement below is given with the preposition "sot" (below).

In the 1980s Sotciastel became famous as the result of research carried out by the University of Trento in cooperation with the Provincial Monument Office and the Ladin Cultural Institute "Micurá de Rü". These excavations proved that a Bronze Age settlement including permanent living quarters once stood here. The kind of articles found: parts of weaving looms, kitchen implements, agricultural tools, jewellery, pins and awls lead us to believe that the settlement was agricultural and pastoral, was inhabited the whole year round and that above all sheep, goats, oxen and cattle were reared.

The settlement in Sotciastel appears to have been one of the first in the valley where people lived for a longer period of time.