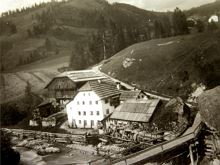 Families which have owned the same land for more than 200 years are awarded a "Deed of inheritance" by the Province of Bolzano-South Tyrol. The Nagler family has been honoured in this way. The original name was "Murin da Coz" (murin = mill) because grain from the Coz farm was milled here. The oldest written documents mention Hof Palua (The Palua farm) in about 1566, Pares in 1780 and finally Murin. The first settlement can be dated 1296; the saw and the grain mill probably needed water power. In 1771 the Brochia family from Longiarü settled here. In common with many other family names in Val Badia, Brochia was reinvented in German, in this case, as Nagler.

In those days priests as well judges came from places outside Ladinia and they could not speak Ladin which led them to renaming their family names; most written documents were set out in German or Italian. Before 1800 the Ladin language was used relatively rarely in written documents.

Now the Murin farm is privat and can be visited outside doing the culture trail in Badia.