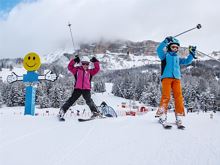 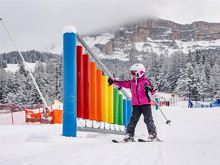 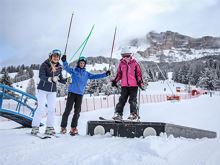 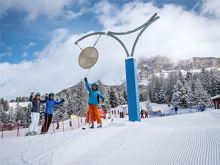 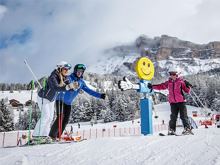 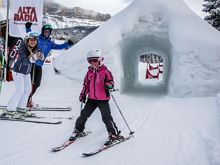 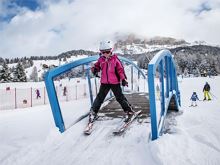 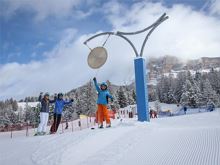 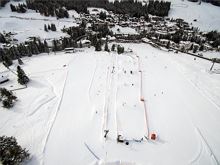 Fun and adventure for kids

A lot of entertainment awaits the young athletes in the Kids Fun Line La Crusc near the valley station of the La Crusc 1 chairlift. Along the ski slope the young skiers, beginners or advanced, meet different obstacles like the Fun Line Rainbow Bridge, a kicker, a smiley which they can greet or the Speed Booster that makes sounds while sliding over. In addition, the slope over hills and through tunnels is accompanied musically by a chinese gong, a outsize xylophone and a „sound high five“.

While the kids are playing and skiing, the parents can keep an eye on them from installed benches enjoying the sun and admiring Mount La Crusc (Sasso Santa Croce) in the Fanes-Senes-Braies Nature Park, part of the Dolomites UNESCO World Heritage. The Kids Fun Line La Crusc is situated near a restaurant, a ski pass office, a ski school and a ski and snowboard rental.

The Kids Fun Line is composed of:

How to reach the Kids Fun Line:

With the Baby La Crusc skilift, in the ski area Santa Croce/La Crusc in Badia.